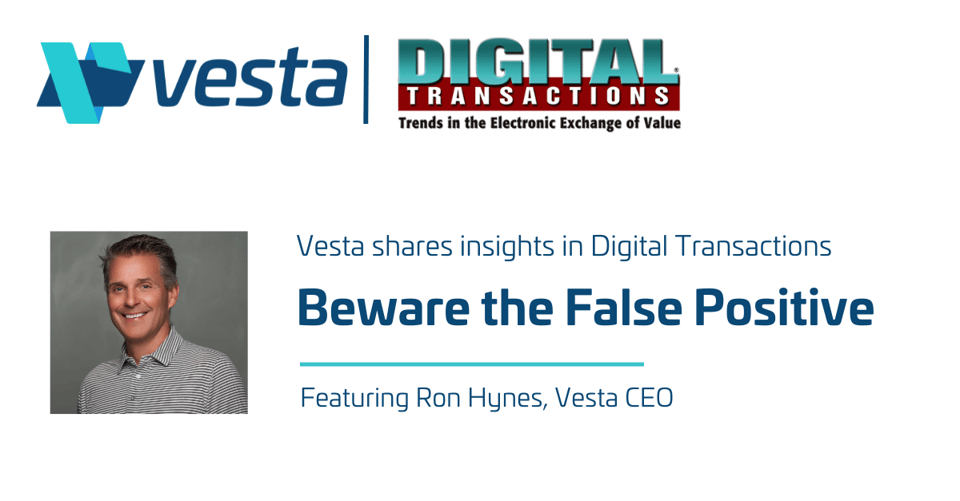 Ron Hynes, CEO at Vesta, discussed with Digital Transactions about false positives and what it means for the merchant.

As an industry, many [of us] are getting too caught up in fraud prevention, which has created a belief that in some cases it is better to deny 10 good transactions than let one bad through,” says Ron Hynes, “When approval rates fall to the 70% to 90% range, merchants are leaving a lot of money on the table.”

Some merchants may fear that asking follow-up questions of a customer after an order has been placed may cause the customer to cancel the purchase, but Vesta’s Hynes argues this is the perfect time to review and confirm the order is legitimate. Actual criminals, he says, typically won’t go through the extra steps.

“Fraudsters will drop a purchase when friction is introduced [at any point] during the purchase process and move on,” says Hynes. “Most merchants are afraid of adding friction to the purchase process, but we will introduce it and put the knowledge gained from it back into our [fraud-detection] models.”

The interview was along with industry experts who talks ways in which merchants view transaction, myth of zero fraud and merchants that reject all transactions that initially look suspicious leave a lot of money on the table.

Payments NEXT: Digital Payments and the Future of Commerce in the Next 10 Years