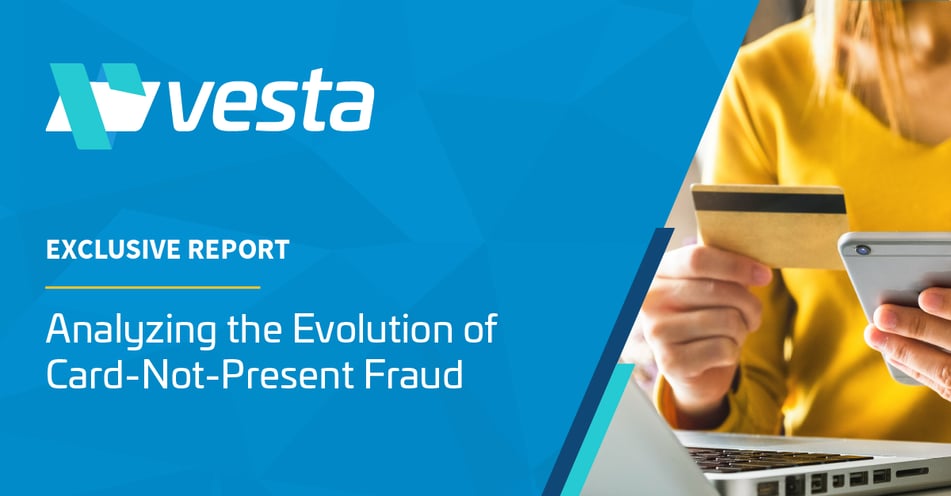 PORTLAND, Ore.– September 22, 2021 – Vesta, an end-to-end transaction guarantee platform for online purchases, today released its first Global Card-Not-Present (CNP) Fraud Report, which includes an analysis of millions of digital transactions from the first quarter of 2020 through the first quarter of 2021 to track how CNP fraud evolved during that time frame. The overall percentage of global transactions its system identified as being potentially fraudulent ranged from 10 to 13%, with the average value of each fraudulent transaction ranging from $126 to $155. Fraud attempts, however, are not evenly distributed: fraudulent attempts at individual merchants ranged from 0.8% to over 30% depending on business vertical and geography.

“If you’re an eCommerce business doing 5 million transactions per year and 13% of those are fraudulent, you’re looking at 650,000 bad transactions, and if each one of those comes with a $25 chargeback fee, you’re now looking at more than $16 million dollars in fees,” said Ron Hynes, CEO of Vesta. “On the other hand, if you decline too many legitimate transactions in an effort to fight fraud, you end up with significant losses. For example, if that same merchant doing 5 million transactions per year has an average order value of $125 and blocked 30% of all transactions when only 13% were fraudulent, they’re now losing more than $100 million in annual revenue. That’s what makes CNP fraud such a challenging problem to deal with - you have to strike the perfect balance between fighting fraud while maximizing approvals of legitimate transactions.”

“Unfortunately, we’re seeing fraudulent transactions with indirect linkage increasing across the board, and the average value of those transactions is higher than those with direct linkage, making it an even more expensive and complicated problem for merchants to navigate,” said Hynes. “The only way to effectively identify and prevent CNP fraud with indirect linkage is with machine learning, and it’s critical to use models that have been trained against millions of global transactions and can therefore draw connections that humans simply can’t see.”

Vesta is the only instant, end-to-end transaction guarantee platform for online purchases, delivering unparalleled approval rates, a better customer experience and eliminating fraud for leading brands in telco, e-commerce, travel, and financial services. Using machine learning backed by 25 years of transactional data history, Vesta increases approvals of legitimate sales for its customers, while eliminating chargebacks and other forms of digital fraud, driving the true cost of fraud to zero and transferring 100% of the liability for fraud, including chargeback processing, so customers can focus on increasing sales. The company is headquartered in Portland, OR, with offices in Atlanta, Miami, Ireland, Mexico, and Singapore. For more information visit www.vesta.io.

Press Release: PayMongo and Vesta partner to offer fraud assessment and risk detection to protect online payments in the Philippines