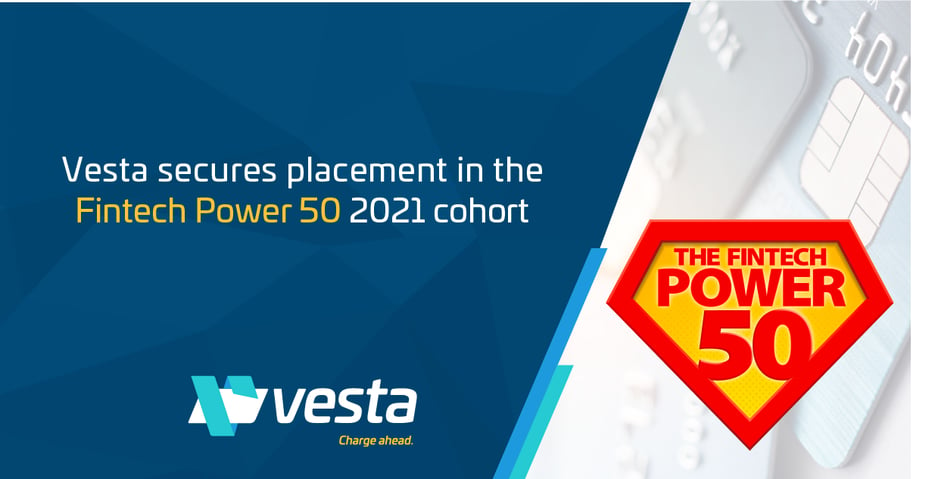 With almost 1,000 companies nominated and 15,000+ votes cast, Vesta was chosen as a member of this year's Fintech Power 50 cohort.

London, 13th July 2021: A list of the top 40 trailblazing fintech’s and 10 of the world’s best influencers has been confirmed. The 2021 Fintech Power 50 launched on July 13th, live on stage at Fintech Week London.

The Fintech Power 50 is an exclusive annual program, which acts as a hub for driving change and creativity in the financial services industry. The confirmed participants this year demonstrate an increased geographical spread for the 2021 cohort, with fintech’s not just from the UK and Europe, but also North America, Asia-Pacific, and EMEA.

Mark Walker, Co-Founder, and Chief Operating Officer of Fintech Power 50 revealed the eagerly awaited list to a live audience of over 300 people at Fintech Week London—the first physical fintech event in the UK since the global pandemic and partner of the Fintech Power 50.

He said, “I’m delighted to announce our final list, live at Fintech Week London. This year we’ve seen not just more nominations from the industry than before but also an increase in voting with over 15,000 votes.

“It’s been a fantastic year for the Fintech Power 50, and I’m proud to say that our latest cohort will have more of a geographical split as the number of companies included that have headquarters in either Asia or North America has also increased.”

Other key stats for 2021’s intake, the third cohort of The Fintech Power 50, include:

Inclusion in the prestigious list not only showcases the most exciting companies and informed individuals in the industry but also offers members access to The Fintech Power 50’s trusted network of fintech companies and leaders, alongside invitations to networking events and support with talent acquisition.

A few of the leading international fintech companies honored on the list include:

To see the complete list of companies included in this year's cohort, download the press release below.